by Anonymous
2:52 | Read By Hugh Bonneville

Wild in Art invited people from across the UK to submit real-life stories and poems about key workers for a chance to be included in the Gratitude installation. Visitors to the installation can listen to stories and poems from adults and children, that pay tribute to all key workers, from doctors on the front-line to shopkeepers and delivery drivers, carers and teachers, via the Gratitude App and via the Gratitude website. The stories have been recorded by a host of well-known voices, to help us tell the story of this unprecedented time. 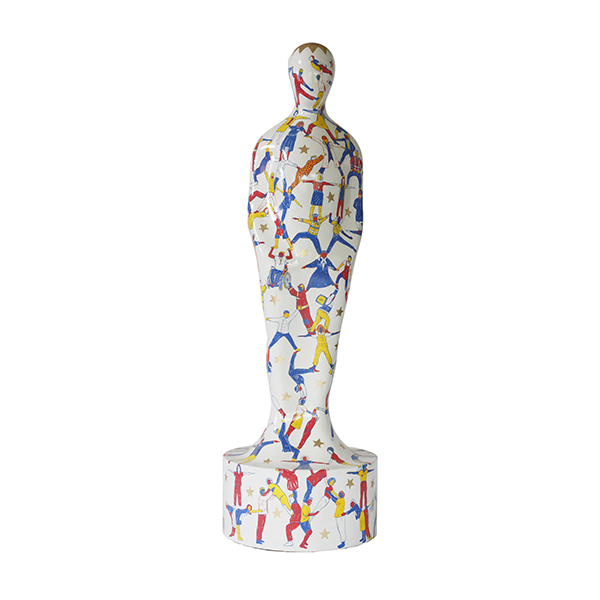 Super Stars pays tribute to the amazing work done by all key workers who have kept the country moving during the Covid-19 pandemic. It consists of uniformed figures representing various key workers, all delicately engaged in a balancing act, bending over backward and performing superhuman feats. It is painted in primary colours of just yellow, blue, red (the artist’s signature style), along with golden stars which allude to the title.

After completing a Fine Art degree in the mid-2000s Edward started designing bespoke wedding stationery for private clients before working on branding and large scale artworks and murals for the leisure sector. Most recently he has mostly been working with up and coming independent businesses, creating branding, site-specific artworks and artworking projects.

Premier Inn is supporting Gratitude to give thanks to the true heroes throughout the crisis. Premier Inn recognises it was all key workers, including their own, who kept the nation going through some of the most challenging times in a generation. Thank you for your hard work and commitment in the face of such extraordinary circumstances.

Hi, This is Hugh Bonneville and I will be reading a story about Charles Dickson which has been written for Gratitude, a wonderful public art installation, which commemorates and celebrates the stories of this extraordinary moment in time and pays tribute to all of our key workers from across the country.

Hi, This is Hugh Bonneville and I will be reading a story about Charles Dickson which has been written for Gratitude, a wonderful public art installation, which commemorates and celebrates the stories of this extraordinary moment in time and pays tribute to all of our key workers from across the country.

To give you some context, this story is about Mr Cool, aka Charles Dickson, who’s been helping London’s key workers get on their way to work safely throughout the pandemic, and supporting others in need around the world too.

People call Charles Dickson ‘Mr Cool,’ and it’s fair to say he’s a bit of a celebrity on the rail network. He’s worked at Southern Railway’s Gipsy Hill station, in South London, as a gateline assistant for the last nine years – checking tickets and looking after all the passengers.

He joined during the 2012 London Olympics where, as he remembers, he suddenly found himself, “helping 5,000 people from all over the world navigate their way around London.” Former Olympian Sebastian Coe gave Charles the nickname because he was so calm under pressure; ‘Mr Cool’ has stuck ever since.
Cool certainly does run in the family for Charles. His son and nephew are both professional footballers, and he’s the uncle to UK rapper Tinchy Stryder – so at 64, he’s taking his own celebrity profile in his stride!

He really missed his usual chats with the locals during the lockdowns, and he had a new kind of pressure to deal with. Passenger safety is a crucial part of his role, so he made sure everyone who could was wearing a mandatory face covering and carrying hand sanitiser with them. Always one to go the extra mile, he even carried spare packs of face coverings around for those who had forgotten to bring theirs.

Charles came to the UK in 1981 from his home country, Ghana. He’s been on a mission to help people in need his whole career. In his early twenties, he went to navigation school and ended up working in South America – in Brazil and Venezuela, where he saw people living and sleeping on the river banks because they had no home to go to. It ignited his passion to help people, and he still does that in so many different ways to this day.

His friendly charm and kind heart mean Southern Railway customers and the local community often help with his charity work, too, by donating essential items for his collections for countries in need. His strapline is ‘from cookery to carpentry,’ and he says “whatever you have to offer, I’ll make sure it gets to someone who needs it. I’ve sent printers, microwaves and kettles before, so it really is possible!”
He makes it sound so easy – but that’s just him: (Mr) Cool under pressure. We are so grateful to have him at our station.

Thank you for listening to this story. For more stories and information on Gratitude, please visit: www.thisisgratitude.co.uk

This Is Gratitude Art Trail